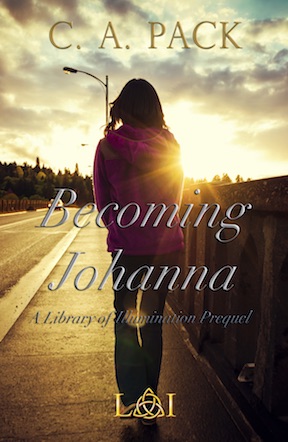 Release: June 28, 2016
Becoming Johanna by C. A. Pack
A Library of Illumination Prequel Novella
She’s young. She’s smart. She’s ready to live life on her own terms. But a teenager quickly discovers independence comes at a price.
Since the age of three, the grim conditions and strict directives of Peakie’s Foundling Home have ruled 16-year-old Josefina Charo’s life. Her inquisitive nature and love of books highlight an intelligence that allows her to graduate two years early from secondary school. However, she is disappointed to learn Peakie’s will not provide a higher education, nor will she be permitted to leave because she’s too young. Her spirit dampened, she spends the next several months working in the home’s laundry and cafeteria for menial wages, while she searches for a way to escape her prison. Finally, she sees her chance and grabs it, but she soon discovers the harsh realities of being on her own. Life can be difficult, at best, for a teenage girl with no real world experience.
Amazon: http://amzn.to/1TqB684
Website: www.libraryofillumination.com
Goodreads: http://bit.ly/2934cIx
Facebook: https://www.facebook.com/libraryofillumination/
Rafflecopter Giveaway: www.libraryofillumination.com
Friday 30 January 2015, BBC Radio Bristol, Steve Yabsley Show, 12:00 noon.
Judy Darley will be discussing among other things dormice and blossom poems. The show will also be available as a podcast after broadcasting.

http://www.bbc.co.uk/programmes/p02gwq1y
A A Abbott interview with quirky questions posed by J R O'Neill

http://www.jroneillwrites.com/abbott-interview/
10/01/2015 The very talented artist and writer Carolyn Stubbs has posted a guest blog for #TheCultureHour
http://theculturehour.blogspot.co.uk/2015/01/theculturehour-guest-blog-carolyn-stubbs.html
Powered by